Chinese Zodiac Signs. See The Animal With Your Best Compatibility

Chinese zodiac signs can reveal your relationship compatibility. Based largely on a system that involves numbers and animals you can determine how good of a match someone would make as a friend, lover, or business partner.

The origins of this oriental celestial approach are as mysterious as they are ancient but many people are willing to swear that Chinese astrology can show you how to determine compatibility with potential romantic mates with an uncanny amount of accuracy. It is It is the designated animal characteristics for the year of your birth that will tell whether a match will be a good one or not. Dare you read on?

First things first! What Chinese horoscope are you?

As you can see from the years that are listed below each animal rules for one year and then the next animal has its turn. Every 12 years the cycle begins again and you can easily determine what year is controlled by which animal whether you are researching the distant past or predicting the future. You can find your animal by finding your birth year in this list of Chinese horoscope years.

Important Note: If you were born between January 21 and February 19 you will need factor in when the New Year began to find your correct birth animal. This is shown here > > 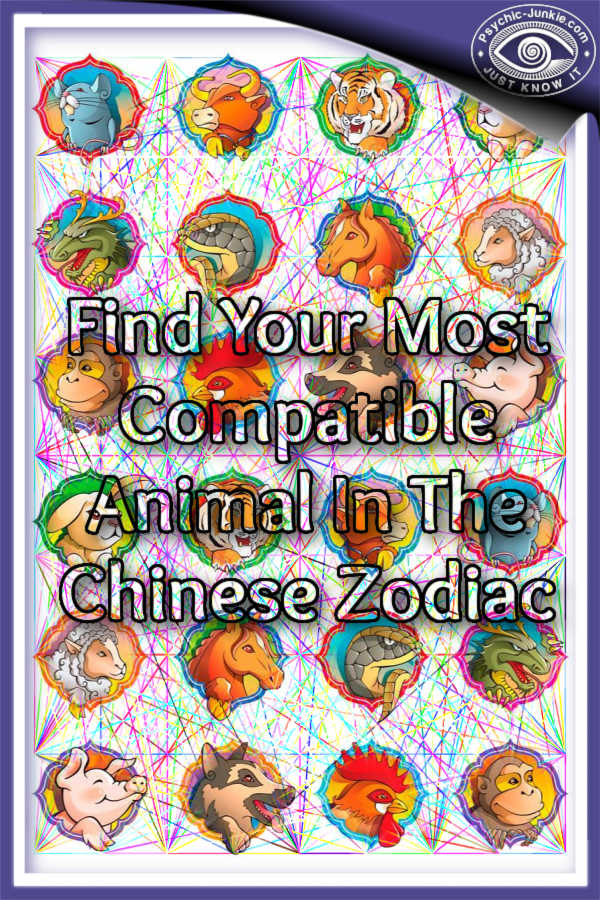 What can Chinese zodiac signs reveal?

Your animal sign gives information on your basic personality, but also on your lucky numbers, ruling or best hours of the day, the fixed element and other information, including lucky days, colors and flowers. The forecasting comes with the interplay of your sign and that year's element and animal sign. Years with the same animal sign as yours can be more unlucky. What makes a difference are the elements associated with your birth. Relationships are also forecast based on both your animal and element signs and the other person's. This art also is used to forecast health and finances. It is a complementary tool for decorating with Feng Shui to bring maximum luck to your life.

Each year of a rotating twelve year cycle is assigned to a particular animal: rat, ox, tiger, rabbit, dragon, snake, horse, sheep, monkey, rooster, dog and pig.  The compatibility for each of the Chinese zodiac signs has been thoroughly researched and analysed by Chinese scholars over many centuries. Today there are a number of traits that each individual is believed to possess, depending upon which animal sign governs their life.

Who is the rat compatible with?

Those who have been blessed to be born in the Year of the Rat are highly intelligent and very likable. These individuals possess charm, wit and a fascination for life. A dragon will be an extremely compatible match. Rats will also find love and happiness with an insightful pig, a highly intelligent monkey or a loyal and supportive dog.

Who is the ox compatible with?

The placid, plodding ox can sometimes be mercurial in its behaviour. Normally the ox is staid and docile, but this animal does have a short temper that can flare up when least expected. These individuals are most compatible with a dragon, rooster or a snake because these animals possess traits that complement and enhance those traits possessed by the ox. *Rabbits, dogs and pigs will make wonderful friends and confidantes for the more mercurial ox because they are not temperamental and can understand the behaviour of the ox. 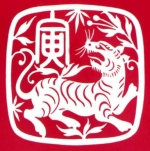 Who is the tiger compatible with?

The tiger is deeply thoughtful, sympathetic and possesses great sensitivity. These individuals are most compatible with the loyal honest dogs or happy, free-thinking horses. *Secondary matches to consider would include other tigers and cheerful, courageous pigs. 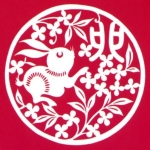 Who is the rabbit compatible with?

Rabbits are viewed as ambitious, clever and very talented. The most compatible match would be the loyal and equally talented dog or with the gentle and supportive sheep/goat. *Secondary matches can be found among dragons, snakes, rats or an ox.

Who is the dragon compatible with?

If you were born in the year of the dragon you are perceived as being honest, clever and brave. You will be most compatible with the intelligence and wit of monkeys and rats. *A secondary choice in Chinese zodiac sign compatibility might include horses, snakes or roosters.

Who is the snake compatible with?

Snakes are seen as fortunate animals, particularly with financial situations. These individuals should look for a match with a patient ox, a trustworthy dog or an energetic and talented rooster. *Some snakes can also be very compatible with a rat, goat/sheep or rabbit.

Who is the horse compatible with?

The horse is a happy, cheerful and easy going individual. However the horse can also be a bit impatient. These individuals will be most compatible with the loyal dog, a brave, protective dragon or a supportive tiger. *Other secondary matches could include sheep/goats or even other horses.

Who is the goat compatible with?

A person born in the year of the Sheep (or Goat) is gentle, reserved, quiet and compassionate. Although they are thoughtful, intuitive and wise many sheep are also a bit pessimistic. These traits are very compatible with other sheep. Compatible matches can also be found with kind rabbits and sympathetic, understanding pigs.

Who is the monkey compatible with?

Monkeys are considered to be somewhat erratic in Chinese zodiac sign compatibility charts. Yes, these individuals are gifted in many areas and are often geniuses, but their erratic behaviour can make it difficult to find a compatible match. The flexible nature, intelligence and high level of skills monkeys possess make the self-assured dragons, clever dogs and understanding rats the best choices for partners. 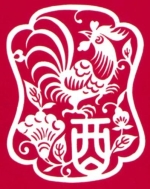 Who is the rooster compatible with?

The rooster is brave, clever and quite an interesting person to know. However they are also known for their egotistical nature. Their best compatibility will be with a fierce and self-assured dragon, a patient ox or a financially astute snake. 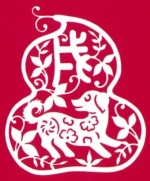 Who is the dog compatible with?

Dogs, according to Chinese astrologers, display the finest traits seen in any humans. These individuals are loyal to a fault, brave, trustworthy, reliable and honest. You might even call them the "Boy Scouts" of the Chinese astrological charts. The most compatible matches for a dog would be a cheerful and optimistic horse, a clever pig, an intelligent monkey or a thoughtful and talented tiger.

Who is the pig compatible with?

Chinese astrologers describe pigs as very noble, kind and chivalrous individuals who give their all to each situation. When it comes to ideal compatibility the pig should search for a harmonious relationship with other pigs, with clever, witty rats, with gentle goats/sheep or with the entertaining and clever rabbits.

Get A Psychic Reading With Chinese Astrology Expertise

Which Chinese Zodiac animal are you? The year of your birth can say a lot about your personality, your compatibility with others and your destiny. Find out what your Chinese Zodiac signs say about you and benefit from this ancient wisdom. Chat with a Chinese Astrologer now!

There is no doubt that compatibility between Chinese zodiac signs offers a great deal of thoughtful insight pertaining to the characteristics for close relationships. You must be the ultimate judge of how accurate these revelations are, but do not overlook the potential wealth of information that this indicator is able to provide.

How To Understand Chinese Zodiac Charts 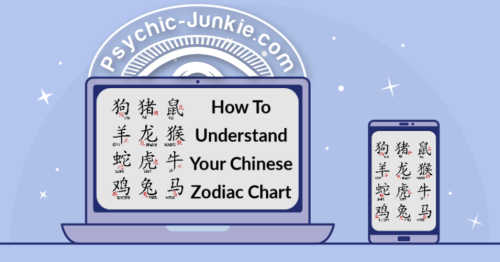 Learning how to understand your Chinese zodiac signs can be a huge gift when it comes to revealing the truth about you and others. Getting to know your animal and your element with its heavenly stem is both fascinating and very helpful in many ways.

Chinese Astrology is very different to the Western predictive system. When you hear the word astrology, do you immediately think of your sun sign and the relationship of the planets to your date of birth? That's not the case with Chinese zodiac signs.

Your Chinese zodiac signs are based on the lunar calendar and the interaction in the cycle of astrological animals based on the position of Jupiter in its solar year and the five elements in their yin and yang form. Since there are 12 animals or positions and five elements, the cycle is 60 years long. Each element has a 12 year cycle associated with each animal of the twelve Chinese zodiac signs. For example, a monkey can have a water element born on a specific year, but the monkey born 12 years later would be wood. The elements are also yin or yang, a building one --- such as growing trees for wood --- and a harvesting one --- such as cutting that wood and using it to build.

To make it a bit more confusing, the Chinese calendar doesn't coincide with the Gregorian or Western calendar. It's a lunisolar calendar, whereas the Western calendar is strictly a solar calendar. The significance of that is because the Chinese New Year begins on a different day each year. It is set based on the new moon closest to the start of spring, between January 21st and February 21st. Which means that even if you were born in a specific year, if it was between those two dates, you might be one of two different animal signs, based on the date of the Chinese New Year that year.

Just like the astrology familiar in the Western world, the day, hour and month you were born has a major significance in Chinese astrology. For a complete reading of your charts based on Chinese zodiac signs, you need to include these, just as you would for reading a chart in Western astrology. However, just knowing which of the “twelve earthly branches” you belong --- the animal sign --- can give you a tremendous amount of information. Your birth date will also provide which of the “ten heavenly stems” are associated with your birth. These are the five elements --- fire, water, earth, metal and wood --- and whether they're yin or yang. Therefore each of the Chinese zodiac signs will have two corresponding element signs.

Get A Psychic Reading With Chinese Astrology Expertise

Which Chinese Zodiac animal are you? The year of your birth can say a lot about your personality, your compatibility with others and your destiny. Find out what your Chinese Zodiac signs say about you and benefit from this ancient wisdom. Chat with a Chinese Astrologer now!