Catching Premonitions In Dreams And Getting The Messages

If you are experiencing psychic premonitions in dreams here are some ideas on knowing a prophecy from a normal dream, how to identify your visions, better understand them, and then know what to do with them.

Can your dreams be premonitions?

Yes, on occasions, dreams can be prophetic. For some people their premonitions happen only in dreams. The truth is that we are all spirits having a human experience and as such we all possess, what can be described as, a human antenna. If you have already developed your psychic ability your antenna will be tuned to universal wavelengths.  And if this is all new to you, your antenna will easily be distorted by your conscious mind. At night when we sleep, the dream state gives us all moments of clear reception not corrupted by our mind’s chatter, or the noise of others. This is how we will often get premonitions in dreams. However, if we do not recognize them as such, they can slip by unnoticed. 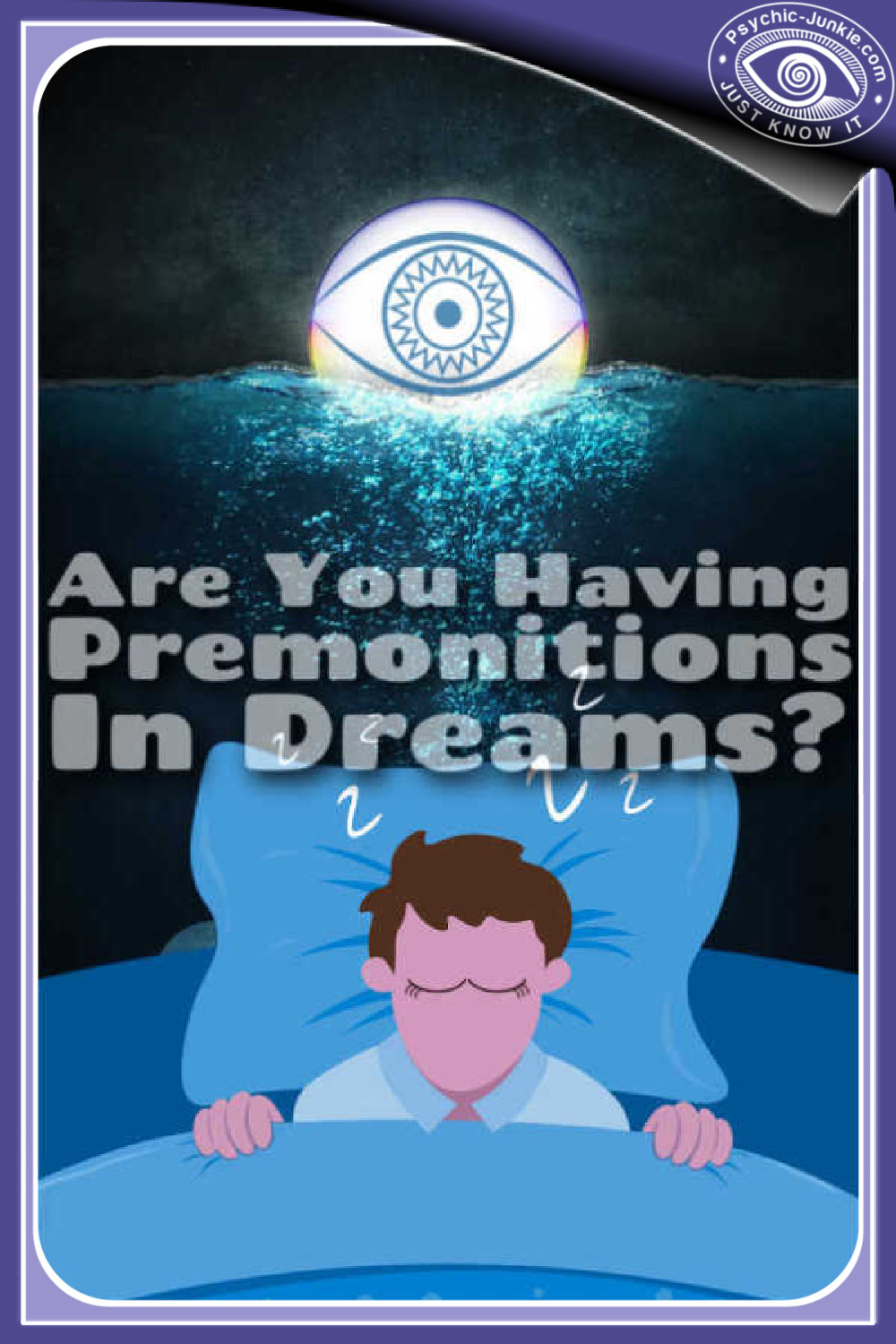 What does it mean when you have visions?

I’m presuming you mean prophetic visions in dreams or in meditations. Having visions in this manner is a form of clairvoyance – the psychic ability to see with extra sensory perception. If you are a practicing clairvoyant, you can shift into an envisioning state at will. But if you are not yet aware of having any psychic ability, you will be more likely to experience premonitions in dreams from time to time.

How To Understand Your Premonitions In Dreams

Are your dreams telling you something?

Can you meditate upon your dream visions?

How do you deal with premonitions?

Personal dream analysis reveals what your heart and subconscious mind want you to know. Discover the meanings of your dream symbols with the help of an online psychic dream analyst to find your way to love, inner peace and joy.

Your Premonitions In Dreams

My Gifted Premonitions In Dreams - by Tom (Kentucky USA)
One night while I was sleeping I found myself drifting to a light. As I got close I started to see some of my dead family members. I woke up wondering who I just met on the other side. A year passed and I found out who my uncle is and he paid for me to come and visit him. When I got to his house in Indiana I told him about this experience. He confirmed that it was my dad's sister I had met in the light. I asked him if he knew who the men I saw were. He said I had described my dad's brothers. I was like wow! He then said to me “Tom, you, your dad and me all have this gift. We have accurate premonitions in dreams". I was like, ok that explains a lot.

Premonitions In Dreams or Chance? - by Leonie (Gidgegannup , W.A, Australia)
Some years ago after waking from a restless night and early morning dreams I had told to my ex-husband about a dream that was so vivid. (I might add my husband always ridiculed me for my experiences of this nature so I was reluctant to tell him but this dream was important enough to me.) - In my dream I had seen a dark haired and bearded man in a suit walking along the scaffolding of the first story of a house being built. As the dream premonition unfolded the man seemed to be hurled towards the ground amongst the building debris on the ground. - In light of this dream I asked him to ring his brother to tell him not to go onto his building sites. (you can imagine what was said in relation to this request). As my brother-in-law was a builder, Italian and bearded, wore suits mostly at work I presumes it was about him. Some 4 hours later I was at a friends house having a coffee and relating to her my husbands reaction to the dream when her phone rang. My husband knew I was there so I went to the phone to be told to get to the hospital straight away as my second son had just fallen from his uncle's building site. As extra work he sometimes cleaned up after the tradesmen for him. This day unbeknown to me he had been cleaning the upper story of scaffolding and was throwing some through the window opening. The scaffolding caught him by the T shirt and dragged him to the ground with it landing him amongst the rubble below. He was baldly bruised and shaken with scrapings and broken teeth but very lucky and within a few days up and about. I went to the scene to collect his car and as I rounded the corner of the street was confronted with the same scene as was in my dream. Had I not told my husband and my friend of the dream, no doubt I would still be swimming in ridicule.

Seeing Visions of the Future - by Angel (Ohio, Springfeild, USA)
When I was younger, I had these premonitions in dreams of the future. These premonitions would always appear at the end of my dreams, and they would look like a random scene that popped in my dreams and had no relation to it. At first I thought that they were random dreams and random images that my mind conjured up... until they started happening. Theses dreams are never scary, thankfully enough but they are always about me and my point of view. I normally dream with a third person perspective, but whenever these visions appear, they are always in my perspective. I never know when these visions happen and I have no control over them.

SIDS Premonition - by Alyssa (Vancouver, WA, USA)
In one of my premonitions in dreams I was walking through the halls of a hospital, until I reached this door. When I opened the door I walked into the room and saw a group of doctors standing around a patient in a bed. I walked up to the bed and saw that it was a baby laying there. I didn’t know the baby’s name, but it was someone important to me and I knew it was a boy. The main doctor looked at me and said "I'm sorry there is nothing we can do" I was horror struck and kept saying "NO! NO! There has to be something". It was then that I started doing CPR on the baby and all the while I kept thinking that he was so small and that I would break him. The dream ended when I revived him. After I woke up I couldn’t remember anything. It was 5am and all I knew was that something was tugging at me and I couldn’t get back to sleep. Later in the day I found out that my aunt Michelle had woken up during the night and found her baby, Armani, with no pulse and blood coming out of his nose. She called 911 and ended up doing CPR on him. When the ambulance got there they had a pulse but lost him on the way to the hospital. It ended up being SIDS.

Premonitions In Dreams Of Princess Diana - by Caroline (South Africa)
I had developed a strange interest in Princess Diana; a kind of a concern. I watched the Panorama TV interview and announced out loud, "she is not going to live long." Then I was in a car with a car salesman, I said, "a Mercedes is the safest car to be in an accident?" He said yes. I then said," but it is not completely safe," Again it was just a feeling. Then I dreamt about a blonde woman climbing into a black big car, and I was above, and I grabbed her blonde hair with much force and tried to pull her and stop her from getting into the car. The emotion was extreme. I woke up and told my husband exactly what I dreamt. The dream had disturbed me. Eventually, I went back to sleep. The next morning I watched the nonstop TV coverage about  Princess Diana was dead. I was shocked. I have had many premonitions in dreams but this was one of the weirdest - I was stunned.

Ignited Premonition - by Ceci (Kansas City USA)
I had been dating this guy for six months and spent a lot of time at his apartment. One day I was lying in bed at his apartment just zoning out but also thinking in my own little world. I thought about random stuff, like - what if there was a fire in the apartment - figuring out if the place got burn down it would start at a certain corner. And most likely the restroom would be safe spot! I even started dreaming up escape routes if anything like that would happen. This went on for three months with me thinking I am just overthinking! Before I would go to work I would check all appliances and make sure everything was turned off. I even thought of changing the apartment around to have good flow of energy. The very last day I told him that it's not good to live on bottom level of apartment because I felt that the energy upstairs was too heavy and pushing downward! And so that day I went home and slept at my house because he went out that night and ended up sleeping at his friend’s house. Something he usually would not do! All that night while sleeping at my house I tossed and turned a lot. I was feeling hot flashes all night like I was burning up, like something was wrong, but I wasn't sure. The next morning I woke up and called him and was wondering why he didn’t pick up my call. So I drove to his apartment because I was worried as he always picks up my calls. When I got to his apartment I was freaked out to find it was burnt from the top floor through the second floor to his apartment too! Eventually he called me and told me that he was OK and that he was not home when it burn down.

If you would like to ask questions, add answers, or comment on this page please use my contact form. Start the conversation with the heading [My Premonitions In Dreams].

My pick of Premonition products from Amazon, publisher may get a commission

The Power of Premonitions - by Larry Dossey

The Premonition Code: The Science of Precognition, How Sensing the Future Can Change Your Life - by Theresa Cheung and Julia Mossbridge