Animals with angel wings - my real-life story about Blackie the dog. I truly believe that God (you can call the Supreme Force whatever you like) has a sense of humor. The incident following will relate powerfully how prayers can be answered in unexpected, and sometimes delightful, ways.

Jean Fritz is the verified author of this guest post.

Many years ago, I held a part-time job clerking in a family owned pet store. The store was located in a seedy part of town. Many of the residents were drug addicts, as there were two or three addiction treatment centers within walking distance. Almost all of the area residents received public assistance of some kind. During the long month of January, it wasn't uncommon for those people receiving welfare and food stamps to run short before the end of the month.

Most evenings, I was not alone in the store as the owner would come in to check up on things, but this particular night I was working solo. It was near the end of January, and the weather had been bitterly cold and snowy for the past few days. The streets were empty, and for an hour or so, not one customer came in. 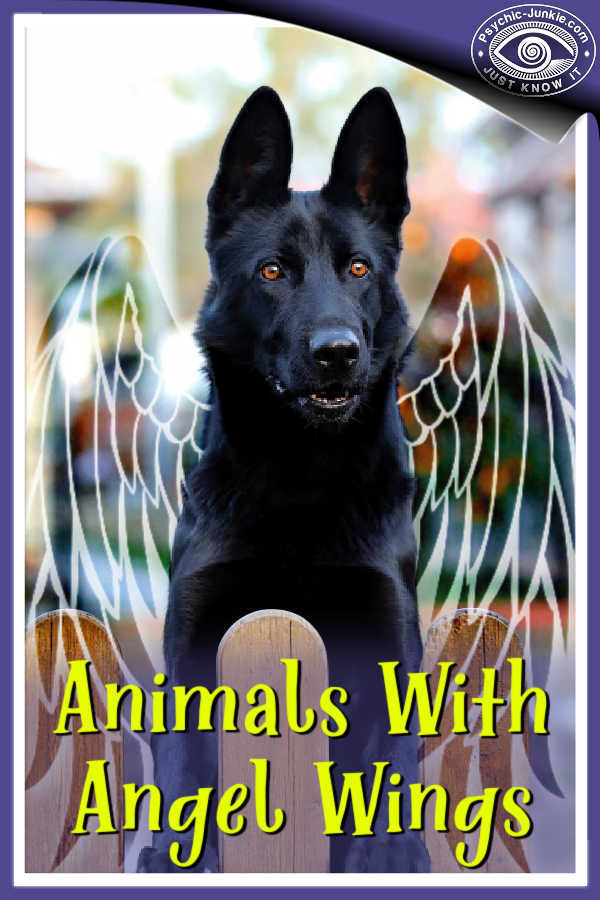 Blackie Was One Of The Animals With Angel Wings That Day

As I fed the parrots and cockatoos, I heard the bell on the entry door jangle. Two young men entered. They were not quite teens, but did not look like adults. They appeared nervous and began wandering around. I noted a bulge underneath one of their coats; I was immediately on edge, as it looked like the outline of a gun. I suspected the two were casing the store, waiting for an opportune time to rob it.

I didn't want to appear alarmed, so I gathered my courage, put on my game face and nonchalantly asked if I could help them find anything. One of them answered, "No, we're just looking around." I answered that if they had any questions I would be happy to answer them. I then went to the back room.

I hid in one of the storage areas and whispered a prayer. "God, please send the owner or someone. Get rid of these two guys. I really don't want to die here tonight!" I felt a strange sense of calm wash over me, as though God said, "You're prayer is answered. Just wait."

I came back out front and the two were still there. It had been 15 minutes. There still were no other customers.

I continued working, or at least putting on a show; I dusted shelves, rearranged stock and spent time petting Chloe, my favorite cockatoo. The two boys continued to roam the aisles. I watched the minutes tick by on the clock, counting down until I could tell them it was closing time, and hoping silently that they would leave before then. If they were waiting for me to count down the register and make the night deposit, I was cooked.

It was 15 minutes to closing time, and finally, a customer dashed in the door. I was thrilled, and hoped for the first time that he was a chatty one who would linger until past close. He wasn't. He hurried in, asked for a large jar of koi pellets, paid for them and walked to the door.

He opened the door, shut it, and with an anxious voice said, "There's a HUGE dog out there!"

I went to the door, and the owner's German shepherd dog, Blackie, was sitting outside. His head was cocked as though he were asking, "Hey, why'd you shut that door in my face."

With a feeling of relief, I laughed and said, "Oh, that's Blackie. He's the owner's dog. I guess Bill is out in the parking lot." I then let Blackie in the door, assuming he would take his usual resting spot behind the counter.

As if Blackie was really one of the animals with angel wings, he had other ideas. He began to patrol the aisles. The boys were circling around once again, and were suddenly confronted by Blackie. His fur brindled and he bared his teeth. I heard a distinct, low growl come out of his mouth. The boys looked at Blackie, noticed a sign depicting a German shepherd over the door that read "Guard Dog On Duty", and both ran out the door. The tension flowed out of me like the sweat had been previously. I quickly locked the door and said, "Thank you Blackie! I've got to tell you father (his owner) about what you just did!" I then counted the register down, prepared the night deposit and waited for Bill to come in.

And I waited.... and waited. After fifteen minutes, I looked out into the parking lot to see if Bill's car was there. It wasn't. There were no tire tracks in the snow, other than those made by the sole customer. I looked at Blackie, now resting behind the counter, teasing the guinea pigs. I asked him, "Where's your father, Blackie?" You could almost see the dog shrug his shoulders.

Perplexed, I called Bill's home. His wife answered. I asked her if Bill had come by the store during the evening. She said, "No, he's been here all night watching television." I then asked, "Did you know that Blackie is here? He came in a few minutes before close." I could hear his wife speaking to Bill in the background. She came back to the phone, "It looks like Blackie jumped over the fence. He's never done that before!"

Blackie not only had jumped over a 6 foot chain link fence, but he had navigated nearly 2 miles down one of the town's busiest streets, through several inches of snow. The dog whose worst vice was menacing guinea pigs had routed two would-be robbers. The answer to my prayer came packaged with four feet, a tail and a tongue that hung out fairly often. Animals with angel wings? You bet!

The New Testament tells us to be kind to strangers, as they may be "angels unaware." It's wise to be kind to animals as well; you never know when they might be real life animals with angel wings.

Jean Fritz is a spiritual counselor, law of attraction coach, and a farmer in Anderson Indianapolis USA.

She often tells clients to visualize and pray for the best that they can imagine, but not to limit the Universe in how it answers your prayers.

My pick for Animals with Angel Wings products from Amazon, publishing affiliate may get a commission

The Archangel Guide to the Animal World - by Diana Cooper