How To Use I Ching Coins With The Book Of Changes

To learn how to use I Ching coins as a fortune telling oracle using the ancient Chinese Book of Changes you will need three coins. Pick some you can easily determine the heads from the tails when flipped. Any coins can be considered; they certainly do NOT need to be traditional Chinese Feng Shui coins.

How old is the I Ching?

According to legend, the original I Ching Oracle made the cut and survived the great book burning of 213 B.C., perpetrated by Ch’in Shih Huang ti, the first Chinese emperor. I Ching divination became the only existing prophecy tool, earning its place in history as the oldest Chinese oracle.

The “I” is pronounced “E” and speaks to both the intellect and imagination. Also, “I” refers to “change”, which clarifies why the I Ching has been dubbed The Book of Changes in the English language. It denotes “simplicity”, indicating a profound connection with the natural world. 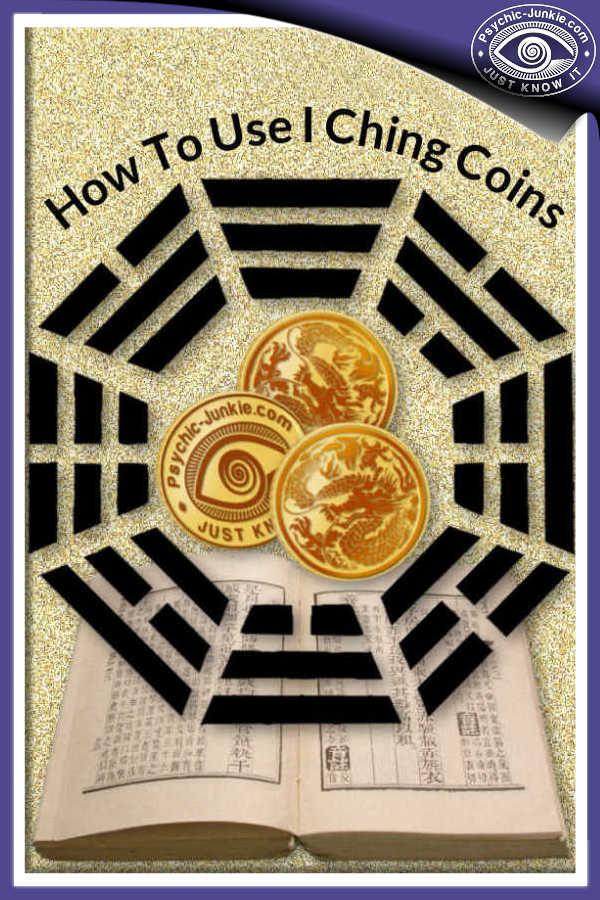 How to use I Ching coins for divination.

What is the purpose of I Ching?

Today, the I Ching serves as a fortune telling oracle and tool to explore the future changes of life. Excepting the Bible, the I Ching is the most translated book. With the passage of time, its devotees have added commentaries. Like the Bible, we can’t be positive about who wrote the main text in the beginning. We do know Confucius wrote the latest commentary, “Ten Wings”.

Fu- Hsi (Fuxi), a mythic ruler, was a Divine being with the body of a snake. Traditionally, he receives credit for developing the original “Eight Forces of Nature and their Trigrams”.

What are the 8 Trigrams?

The idea was to classify all phenomena under heaven and on earth. The eight forces are placed in a circular arrangement.

Called Pa-Kua, it became the precursor of I Ching. In the 12th century, Wen Wang, ruler Hsi-Chou Dynasty, refined the Pa-Kua to the point it metamorphosed each trigram into 64 hexagrams, completing the complex oracle/divination tool with which we can learn how to consult I Ching coins.

How To Use I Ching Coins As A Fortune Telling Oracle

What is the I Ching hexagram?

Each hexagram is made up of six horizontal solid or broken lines known as yin and yang lines. A solid line represents yang; broken lines signify yin. Yang is the masculine force – positive, virile, dominant. Yin is the feminine force – negative, passive, nurturing.

Hexagrams are basically two trigrams arranged one above the other in a stack, which is then separated into an upper half and lower half. The stack forms the heart for the I Ching prophetic reading method.

How many coins do you need for I Ching?

You will need three coins of the same type with clearly defined heads and tails for yin or yang. Designate yang (male) as one side of the coins and the other as yin (female). If your coins have a male head, make that side YANG and the tails side YIN. Conversely, if you have a female head that becomes YIN, and the tails side is YANG. The yang side of every coin has a value of 3 and the yin side is valued at 2.

How do you consult the I Ching coins?

When consulting the I Ching relax and clear your mind, ask a question, and toss the three coins. Then, after casting the I Ching coins and note the numerical value. For instance, if your first throw was three yins. The value of yin is 2 x 3 coins = 6. Each throw of the three coins gives you a number. You will toss the coins six times. With a pen and paper at hand note the number of each throw and draw a line full or broken in the center line from the bottom up.

These six lines make up the hexagram (consisting of two trigrams).

For a simple reading you only use the broken or full lines. For a more advanced reading you will use the changing lines.

How do you use the Book of Changes?

To read the oracle you will need a reference copy of the I Ching - Book of Changes. (Personally, I like to use the I Ching hexagrams translation and interpretation by Richard Wilhelm the best). After tossing your three coins a total of six times you will refer to your corresponding hexagram in the book to “tell your fortune”. 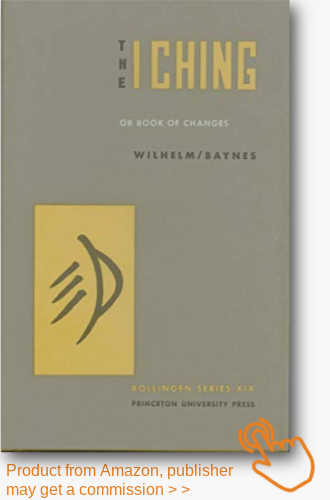 Richard Wilhelm separates his I Ching - Book of Changes into three parts.

The first part is about the hexagrams - the meanings of the lines and Wilhelm's extensive comments.

The second presents two early commentaries that interpret the wisdom of the divinatory text, also with Wilhelm's helpful notes.

And the third part takes us back to the hexagrams for more detailed commentary from both ancient Chinese thinkers and Wilhelm.

Wilhelm was able to offer such enormous assistance because he spent the better part of a decade in China studying under classically trained scholars.

Product from Amazon, publishing affiliate may get a commission > >

Never think of the I Ching as a quick study. But, if you stay with your practice, and learn how to use I Ching coins fluently there is no question your Book of Changes can’t answer wisely.

Wheel Of Fortune Tarot Pendant - ﻿﻿Product from Amazon, publishing affiliate may get a commission > >

Click here to learn about using this pendant to open your heart and soul to the etheric energies so you can always be aligned and abundant!

Wiki -  How to use I Ching coins