Premonition Of Death Dreams. Are They Accurate Or More Metaphoric?

Are premonition of death dreams accurate?

What is a premonition of death? 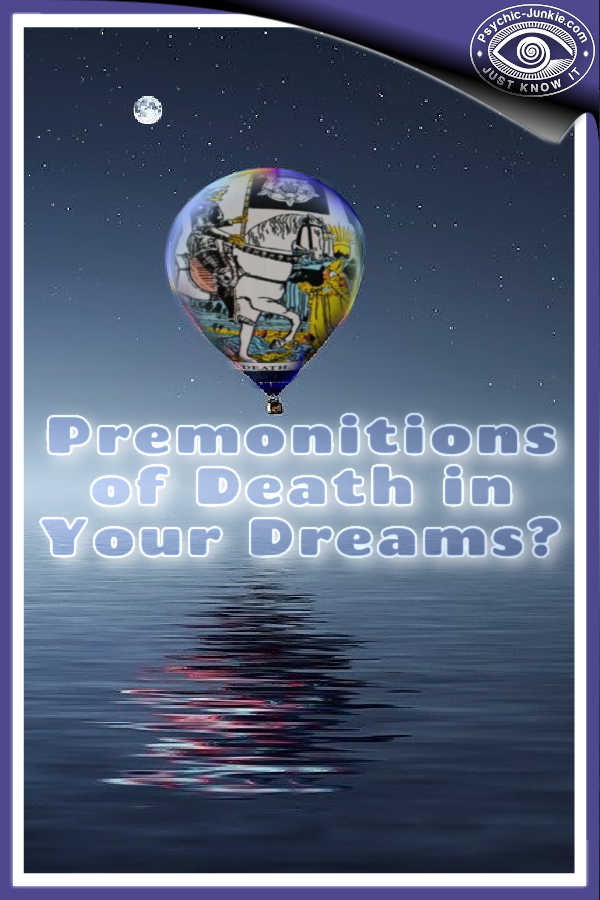 Can you sense when a loved one dies?

The page below includes content from multiple authors. I have verified and approved these submissions. – Ian Parkin

Stories about your premonition of death dreams

A few years back I woke up and started to play with my little children. As I took my eyes away from the children and looked past my bedroom door, I saw a glass funeral coach coming with four black horses with tall black feathers on their heads. The driver being up front on the top and another man on the ground were dressed in clothes dating back from hundreds of years ago. Their hair was long and greasy, and they had tall hats with a long black ribbon and bow in the top half. Their jackets were shaped into the waist and came way out, and their trousers were tight and came in at the ankle. I saw their shoes were long, skinny, and very pointed. Anyway, the one on foot now looked at me, put his hands forward and held out a wreath then disappeared. The next day a new baby next door died. But the strange thing about it is that it was not about the baby who died next door but for me. Because shortly after, my own new baby passed away, she was only nine weeks old. No one else could view this funeral coach apparition yet it’s so real. They looked like normal people; believe me it did startle me. I just kept saying “look, look, can you see them?”

Have you ever seen death walking beside someone you love? And you want to go with that loved one. I do... I have the will and power to decide. Yes, I saw the Grim Reaper today and death’s entity saw me. I can't, I can't go with you... It followed me home continually asking me if I also want to go and be with my loved one. This is the first time I have ever seen the Reaper; I still see spirits all day every day, light and dark, has anyone seen the Reaper’s actual entity before? Please try to help me make sense of this strange and emotionally draining occurrence.

A sign that death is near - by Nikki (Florida USA)

I have only had precognitive dreams of death two times so far and I am not sure why. The only thing I can seem to think is my loved ones on the other said are preparing me. It will be 30 years this May that my father has moved on and I feel that he is the one that gave me this gift as I will call it because I know no other word. Nine years ago, I lost my brother in law to cancer. One week before he died, I saw a shooting star then 3/4 days later I was dreaming of my father. I had never dreamed of my loved one since his passing. I prayed nightly after he passed to dream of him, but I never did. He came to my dream and just stood there dressed in a white t-shirt and blue jeans I tried to run to my love one but my older sister came in my dream and held me back. A few days later my brother-in-law died. At another time I again saw a shooting star and 3/4 days later I had a dream it was my brother-in-law that had passed. He was riding a motorcycle which he loved. Then a few days later my brother died.

A deathly premonition that saved my baby. - by Carla Stewart (Pittsburgh USA)

I was a young mother at 19, my son was 8 months old and taking his nap in a playpen in the other room, I had been washing dishes in the kitchen and for some strange reason this terrible feeling (premonition of death dreams?) came over me. I just ran to the other room to check on him. I was scared out of my life - I didn't even take a second to shut off the water. My son was blue, he stopped breathing. I saw string in his mouth and started to pull it out. He had sucked and swallowed almost 14" of tangled string from an old quilt I had in the playpen. He started choking and screaming and was shaking as bad as I was. As a mother I know this premonition saved my baby from sure death.

Child Psychic - by Anonymous
My daughter has had psychic abilities from an early age. She was twelve years old when her dad died. Six weeks before he died, she came to me and said, "dads dying..." of course I didn't believe her. I told her dad and he said to get that thought out of her head. Five weeks later she told her friend, “My dad has a week to live", her friend didn't believe her either. A week later he died, and at the same time he died she was sick and got sent home from school for health reasons.

Down in Flames - by Kelly (Chicago, Illinois USA)
I had a dream with a deathly forewarning. I was able to see what looked like a bus (but it wasn't a bus) filled with middle eastern people, polish perhaps? I saw women and men that seemed to be important. I saw military surrounding the "bus" and fire. I woke up knowing that all the passengers were killed. The news that morning was of the plane crash that killed the President of Poland, his wife, the head of their military and others.

I have always "known, seen, felt" things. As a teen I worked in a hospital as a Teen Volunteer and had a couple of times where something happened inside me and I just knew the patient in that room was about to die. Within a couple hours of these premonitions, they were dead. I had told the nurses and it kind of freaked them out when they died as I had told them they would before it happened. A few years ago, in a search through family photos of people that I really didn't know. They were distant relatives. I came across one picture and asked, "who is this dead woman," thinking to my self it was kind of morbid. They told me she is not dead she lives in Alabama. Within three months she died from a heart attack while driving.

My pick of Premonition products from Amazon, publisher may get a commission

The Power of Premonitions - by Larry Dossey

The Premonition Code: The Science of Precognition, How Sensing the Future Can Change Your Life - by Theresa Cheung and Julia Mossbridge

If you would like to ask questions, add your own dream interpretation, or share comments on this page please use my contact form. . Start the conversation with the heading [About Having Precognitive Dreams Of Death].

Or if you're inspired to write an article on this subject, please submit a guest post here.