Aleta Mason is the verified author of this guest post of true ghost stories.

My grandmother is what I'd call the reluctant medium of the family. (think of Whoopie Goldberg's character in the movie Ghost. When she realized she actually had "the gift" she said "now that I got it I don't think I want it")

Before a person died, they would come, in spirit, to the foot of my grandma's bed and wave then walk away. It creeped her out especially when the next day she'd hear that they had died.

My mother had many gifts including mediumship and precognition. I, as a child, was mainly telepathic though I've always been aware of spirits around me.

True ghost stories from when I was 3 years old.  My family moved from an apartment to a house. I remember as we drove away, waving to several kids who were my friends. I later told my parents about it and they were confused, saying, "but only your one friend was there waving."

Later, at the new pace, there were footsteps on the stairs that my brother and I both heard, often, though no one was visible. There was the fear we both had, with no rational explanation, that "an Indian" (Native American) would throw a hatchet at our backs as we ran for our lives down the stairs. There were the noises on the roof one Christmas morning long after we stopped believing in Santa Claus. We ran outside and looked up at the roof, thinking it was a friend playing a joke but there was no one around and no footprints in the snow. 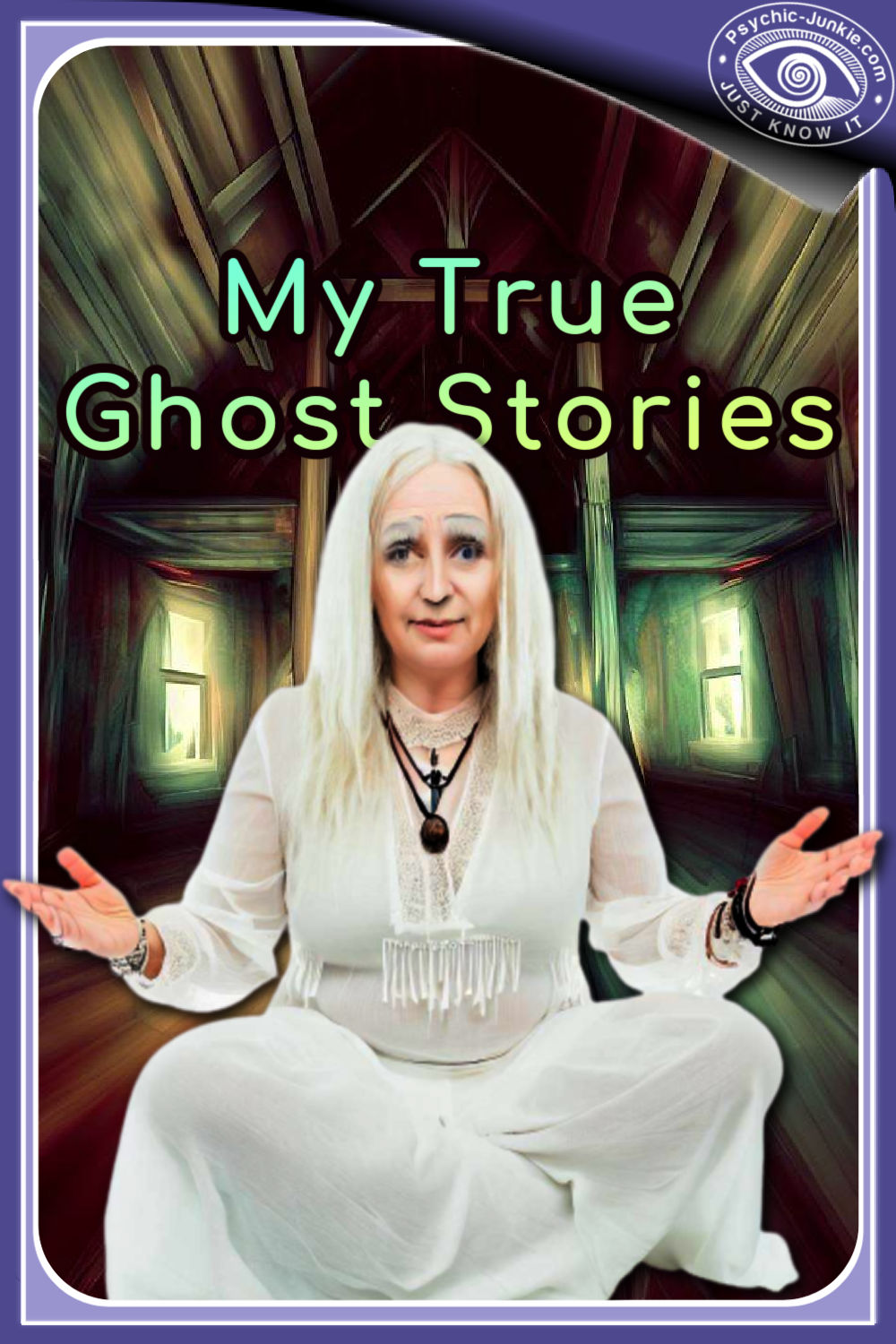 The True Ghost Stories Of A Spiritual Medium

As I got older, my true ghost stories continue. Once, while staying overnight a friend's house, I got up to use the bathroom. All the lights were out of course. Coming down the stairs after using the bathroom, I walked into the living room. There, on the couch was the image of a very tall man. It looked like whitish light on the couch. I never assume and always investigate, so I looked at the windows to see- was it a car outside? A street-light shining in? When I realized there was neither, and no explanation, I got a chill and my hair stood up on my neck. I was afraid that if I ran, he would chase me, so I walked casually but quickly to the bedroom. My friend's mother believed me when I told the story the next day. She felt that it was likely her grandfather who had built the house.

My true ghost stories while moving on to adulthood

I moved into an apartment in Bogota, Bergen County NJ (the county I grew up in). I called this house the "Grand Central Station of the spirit world". They would come into the door, up the stairs, through my apartment and out the back window (I had no back door). Once my mom, my roommate and I were sitting talking in the kitchen. Off the kitchen was the hallway between the stairs and living room/rest of apartment. There was a closet in this hallway. We were sitting facing different directions but each of us either heard or saw something. There was movement "like a light moving across the hall" and whoever it was made their presence known by opening the closet door with force enough to bang it against the wall. I simply said "Hi, Bye" as it moved through and presumably out the back window, as they all did.

Another time, I and a friend were watching a movie in the living room. Something I call "blacker than black" moved toward us from the hall (again I presume it had come in through the door and up the stairs). My friend didn't notice it but my cats eyes bugged out and his eyes were following the dark shape as it came toward us and passed us. On its way out the back window, in my bedroom it slammed through the blinds, making a racket. My friend asked, What was that?" I answered, "a really scary black spirit that just went right past you." I then walked into the dark bedroom to show my friend and my cat that we were safe.

One night, a friend was hanging out with me in my living room. The bedroom was off of this room. She was facing it. I had an altar in my room, with prayer candles, etc. I had a candle burning for a friend who was about to get surgery and she was scared about it. I had invoked the goddess, Isis (I always call "in the name of the Father, Son and Holy Spirit!) to comfort and encourage her and to ensure that the surgery would go well. My friend and I were talking and laughing. She was facing my bedroom. She suddenly got a serious look on her face and announced, "there's a woman in your room." I asked what she FELT about the woman. She said "it feels like a positive thing". I told her I had called Isis to help my other friend. The next day I did a tarot card reading on it and I was told that it was in fact Isis. The cards also told me about my connection to Isis and much more that I probably shouldn't share here, as you never know who will read what you write online, nor what their intentions are.

A scary story from the same house - I had a roommate who was at one end of the apartment, closer to the stairs and hallway. She heard scratching at her bedroom door so she opened it, thinking one of the cats wanted in, but each time, there was no cat there. She tried to go back to sleep but someone kept whispering her name "sounding really creepy" she said. She tried to ignore it, then heard a loud "bang" in the living room (the room between us). I didn't hear a thing because I had earplugs in, as I am a light sleeper. She came into my room really scared and told me what was happening. I went to investigate and found a hanging metal hanging lantern on the floor. The wrought iron plant hanger that it was hanging from was also on the floor. When I looked closer, there was no sign that it had been ripped out, no plaster dust, etc. Whoever it was had stood there and unscrewed it from the wall!

Now I suppose a normal person would have run out of there and never gone back, but by then I was used to this stuff, so I got angry instead and yelled at them to leave my friend alone and get out. We never had material for more true ghost stories there again.

Present day true ghost stories - After about 10 years in New Mexico, only in the past year have experienced some weird things in my house and even on the phone. These entities were very dark so I will not give them attention or power by telling the details. I have since cleared them from my life and all seems "normal" again.

Protection - sure, it's fun to experience and share these experiences, and many spirits are just people who have passed on, or are lost, trying to get to the light. You may tell them to "go to the light" but this is vague and according to the great Tibetan Book of the Dead, not all lights are good ones.

I tell the spirits to go to God only. Meanwhile, if you ever feel in danger, you may invoke Archangel Michael and others such as St Benedictine. Google it.

Experience Your Own True Ghost Stories

My pick for Ghost Hunting products from Amazon, publishing affiliate may get a commission

“I have been called to this work. It is my life purpose, confirmed by many dreams and signs that have guided me to it. My family recognized my gifts at a very early age. There were always books around the house on metaphysical subjects. I started training in metaphysical, spiritual subjects and the healing arts in my 20’s (back in the 80’s). I feel uplifted & peaceful at the end of the day, with the knowledge that I have spent my day helping people. I am grateful that I’ve found my calling and for the opportunity to serve with integrity and compassion.”