A Walking Ghost Tour Through The Peterborough Museum

As usual, before we set off on our walking ghost tour, I asked Wolfie to show me something. So he showed me a left arm and hand – the hand was deformed and maybe has some fingers missing – interesting!

Sue Treanor is the verified author of this guest post.

Another brand new location for us to get our teeth into! Museums can be difficult for walking ghost tours – anywhere where the interior has changed is a challenge for a medium (well for most of the mediums I have spoken to anyway). This is because the bricks and mortar which hold a lot of the residual information have been covered up or changed and this tends to “weaken the signal” – however, the museum seemed to have a lot of energy on the night of our walking ghost tour began. 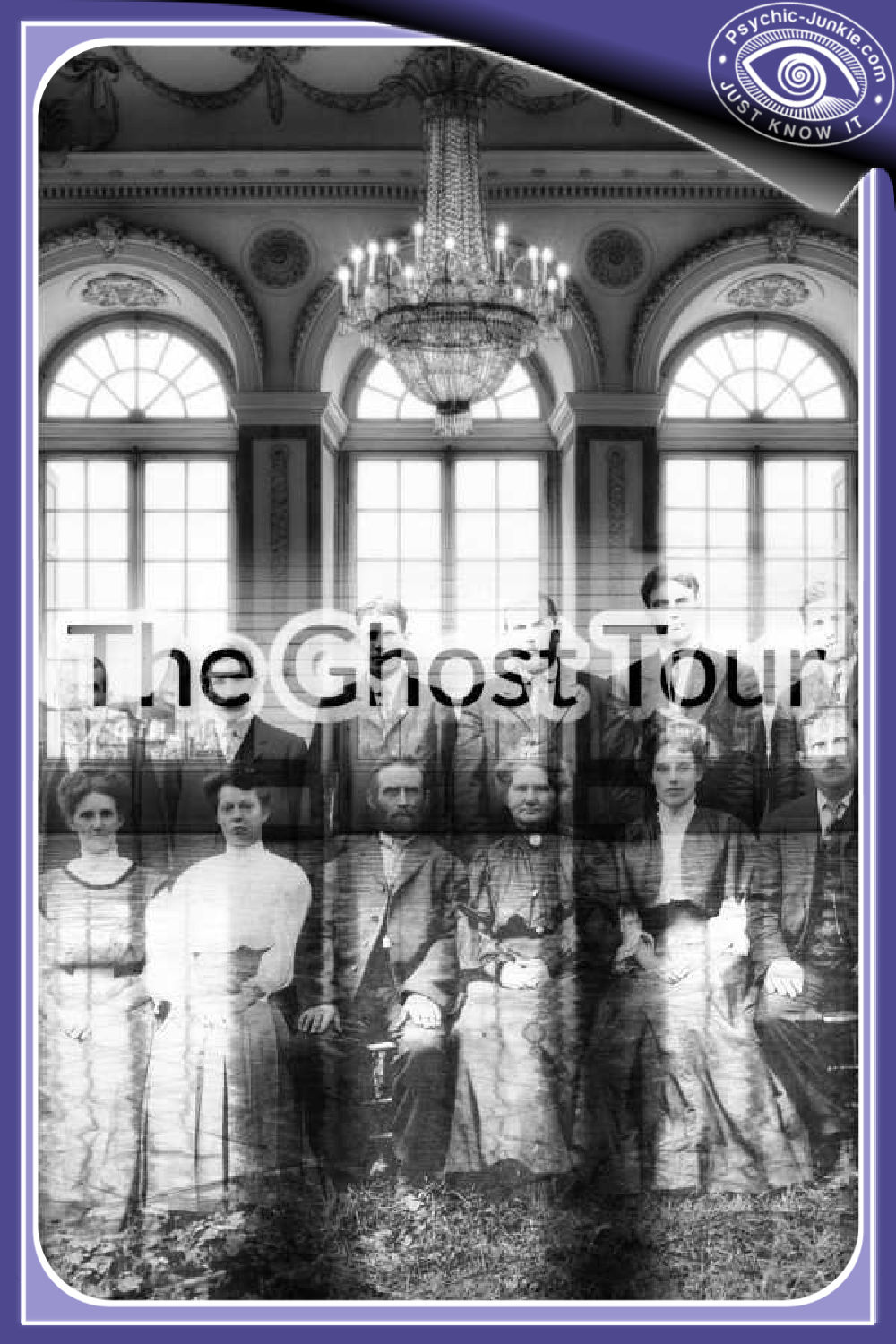 The events officer, Stuart, was a lovely bloke. Very knowledgeable and very interested in the whole walking ghost tour idea, although I could tell he kept a level head and was objective. When we first met, and I shook his hand, something flashed in my mind. I said to him “have your family ever lived here – way back I mean, your ancestors?”. He found this interesting as he said he couldn’t be sure of this but had recently found out that someone with the same name had lived there way back in history. I felt that he was related in some way.

We eventually continued our, psychic led, walking ghost tour. The stairs were strange. Michael felt a child playing on them, a little girl. Michael and I got the name “Ellie” and CJ got “Charlotte” – Stuart said Charlotte was the mother and Ellie was the daughter!

We both felt someone had met their death there, maybe by hanging, but also that there had been a struggle on the stairs and someone had fallen down them. We went into a room where Michael had said he heard someone say “shshsh” . He felt he had to be quiet and this was a place of study – a library. Stuart was impressed with this as he said this was a library at one time but that fact was not published anywhere so could not have been researched (not that we would do that anyway of course, but it’s great start to a walking ghost tour when you hit on something like that). Michael said at this point that he felt that a Judge had lived in this house – Stuart said yes, a Magistrate and his family had lived there at one time. Mike got the name “Fitz” something. Like Fitzgerald or Fitzwilliam.

Then we went to the top floor and into a room which looked a bit like a greenhouse. I felt light headed in here. I could taste a chemical taste and I felt this was connected to the hospital. I said “Operations were performed in here”, and Stuart confirmed this was indeed the operating theatre at one time. Michael was picking up the energy from the room below – he said he could hear pots and pans crashing around and people dashing about – not surprising as Stuart confirmed the room below was the kitchen!

Our walking ghost tour then went downstairs to the period shop. Immediately my solar plexus began to churn making me feel sick – a sign there is a lot of energy about. I said I bet there were lots of physical things in this area – throwing of items, noises, lights flickering etc. – Stuart confirmed this was right – and the ghost hunt continued. Then I saw energy building in the doorway – Michael said it was a Roman Soldier and as I looked I saw him forming. We asked a volunteer to stand in the doorway and as we watched, the soldier’s features began to overlay her face – most people on our ghost hunt saw this. Michael was speaking to him – he was a guard, about 5’4” tall, dark hair, yellow toga-type garment. Stuart took us around to an Exhibit stand where he let Mike have the privilege of holding a 2,000 year old roman sword. This sword belonged to our friend – we both felt that. Michael then went on to say that he worshipped a Goddess, possibly Bridget, and carried a small statuette with him (Stuart said they did do this). He wore a leather hat and I was drawn to the pin which held his cape together – he wanted me to see the symbol on it, which to be honest, meant nothing to me! Stuart asked where Mike thought he was from and he said “Carpathia or a name like that” – Stuart confirmed that this was correct – the sword was found near Peterborough but was Spanish – part of the Carpathian Empire. We also felt that he was not a “family man” – he was married to his job and enjoyed wine, women and song!

On this floor we also encountered a spirit whom we called “the strangler”. He was dressed in late 1700’s early 1800’s clothing and was trying to put his hands around my throat making me cough. Mike saw him too. Stuart said that they didn’t know who he was but many people had described him and felt the choking feeling. I felt he had killed several people. A chill crept about the walking ghost tour team.

We then went to another room on the ground floor which felt very quiet. I saw a monk here. He wore a brown habit and was walking up and down. It felt like cloisters. I said there was once an Abbey on the site which Stuart confirmed. Mike said the monks were beekeepers and I said this was connected to alcohol they made – again Stuart said this was right and they made Meade. I also saw a monk hard at work doing calligraphy. He was coloring and drawing a large letter on the beginning of a page. Stuart said the monks there were connected to the writing of an historical documents (the name of which I can’t remember now!). As for an Order, I heard the word Benedictine and also Franciscan Friars.

Michael said the monks were protecting us – from whatever was in the cellar! We had to continue the walking ghost tour and go down there!

As soon as I walked in I felt like I was being pushed back. I went to walk into a small room off the main corridor and heard “get out”! There was a horrible little man in there. Hunch-backed, smelly, rotting teeth, and wearing a sackcloth. I felt he “scuttled” along the corridor. Michael then saw him being beaten with sticks and I felt a bit sorry for him. I think he took refuge in the cellar and had lived down there at one time. He had a deformed left hand (remember what Wolfie had shown me?).

This man tried to intimidate me “piss off witch” was one of the less rude things he said to me! As you know by now, it takes more than that to scare me off in a ghost hunt! He did oblige with some stone throwing and touching. Several of the ghost hunt team heard him say “bitch” also!

As for the vigils, we did hear some voices – a man’s voice and maybe some laughter, stone throwing, bangs and taps. We also placed a couple of trigger objects which did move slightly.

It was a great location for a haunting hunt and a great group who really got stuck in with us! Thanks to all who attended.

Sue Treanor is a natural, self-taught psychic medium and has been involved in private circles, with Mia Dolan of ITV’s Haunted Homes, appeared in various newspapers, Fate and Fortune Magazine and on Kerrang! Radio. She has also made a short film on Spiritualism for the BBC’s faith Website.

Sue is also involved in spirit rescue and house cleansing and works for a British Ghost Hunting company as a medium. She can take you on walking ghost tours in castles, houses, museums, tunnels and other haunted places throughout the UK.

With her husband Michael, Sue Treanor runs a spiritual shop and centre in a haunted building in Evesham in Worcestershire UK. They sell crystals, books, tarot and oracle cards, jewelry, Angel Goods, figurines, and a large range of Wiccan goods. Their famous and popular open evenings have discounted readings as well as free wine and nibbles for all who attend. Ghost hunters from all over the country come to Spiritus to investigate and come face to face with Colin, their resident Poltergeist.